Easy To Build, Hard To Destroy 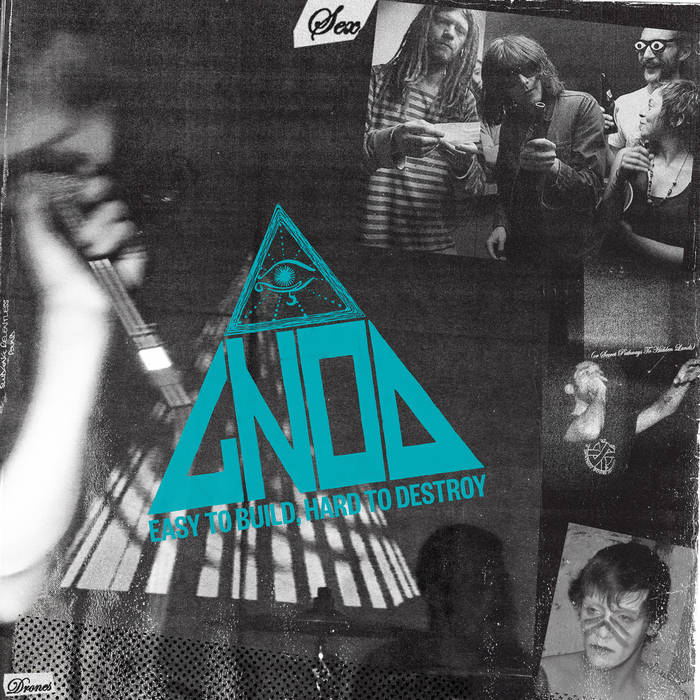 Emperor of the Underground of Doom..

“We just wanted to jam really and see what happened” reasons Paddy Shine of GNOD fourteen years on from their inception in Salford, and no keener to court mystique now than he was then. “That led us down the road of constructing a vibe or an atmosphere for playing live. We played a lot of squats, house gigs and parties in the early days. We lived in each others pockets - shared ideas, books, films etc. We just got on one. Some heads came along for the ride. Good times.”

This momentum gathered quickly into a band with formidable psychic power, captured in style on ‘Easy To Build, Hard To Destroy’ - a compilation of tricky-to-find, obscure and unreleased material from the heady early days of the band, all released on vinyl for the first time. It’s the sound of an uncompromising devotion to rapture through noise and repetition, a portrait of a band whose anarchic approach and raw intensity any other outfit would be frankly terrified to follow onstage.

Captured in the hypnotic rhythmic drive and intimidating atmospheres of tracks like ‘They Live’ and ‘Inner Z’ (both only previously available on Myspace) is a mantric energy which take a jumping-off point from the Krautrock, Japanese rock and underground American psychedelia the band were hammering at the time, as well as the droogy nihilism of The Stooges debut. Yet these feral experiments reach far beyond into a headspace that acknowledges no boundaries, rock orthodoxy or genre constriction.

Revelatory drone-dirges of a Swans/Spacemen 3 stripe here blossomed into dubbed-out abstractions, as on ‘5th Sun’, Shamanic trance-states inspired by the like of Sunburned Hand Of The Man and Sun Araw propelled the band through improvisatory voyages that they themselves frequently couldn’t recall after the event. “I always dug repetition in music” reasons Paddy. “Repetition
is great for long dance floor jams or subtle head squelchers. Repetition helps with the telepathy we developed when playing.” Indeed, listen to the primal roar of the 2009 live recording ‘Deadbeatdisco!!! Pt 2’ (originally released on cult US label Not Not Fun) and you can hear this approach reaching its apotheosis, as well as the sound of Shine’s guitar being smashed to pieces as violent chaos reigned all around him.

Misconceptions of a religious agenda apparently followed GNOD around during this period, yet if there was something cult-like about this hive-mind cum pirate-ship, there was nothing more sinister to it than the eternal positive “We’d meet people who were interested in playing with us and we always said yes” reckons founder member Chris Haslam, “If they were serious about it and came to rehearsal, they’d be in. Most weekends from Friday to Sunday we were in the rehearsal room together, experimenting with equipment, setting up mad pedal chains, plugging things into other things and just plain old jamming. Sometimes the direction of the music would be due to circumstances - a new piece of equipment, a broken collar bone, a new band member; would influence the direction of the music as much as any conscious decision to move into a certain musical direction.”

Bandcamp Daily  your guide to the world of Bandcamp